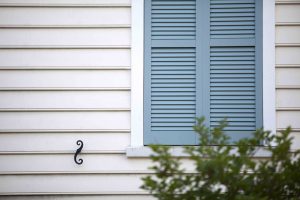 Somewhere along the line, someone decided to transform a shutter into a bolt to the wall decorative object.

Stephen Mouzon wrote in his book, Traditional Construction Patterns, ” Tract home builders have used fake, tacked-on shutters for so long that Americans are almost desensitized to the beauty of the true operable shutters.” Stephen continues, ” Don’t use fake, tacked-on shutters for effect. The effect is sure to be unpleasant. The following are all symptoms of the fake shutter disease:

Symptom #1: Dented frames where shutters are screwed into the wall and the installer doesn’t stop the screw gun until it’s too late.

Symptom #2: Those cute little plastic buttons, like on the shutter below, that the more expensive fake shutters use to try to kid the screws (which don’t exist on real shutters).

Symptom #3: Shutters that are not exactly half the width of the window.

Symptom #4: Round-top shutters that do not match the window radius.

The reality is, the shutters on a home may never open and close. However, putting shutters on a house that are not operable scream “I AM FAKE AND CHEAP”. Using a proportional, operable shutter will enhance the project so much greater than shutters that appear to be plastic. Historically, price has driven this decisions, with Aeratis’ Custom Operable Shutters in-a-box product line, a lifetime warranted shutters is now a 1/3 the price of a wood shutter.